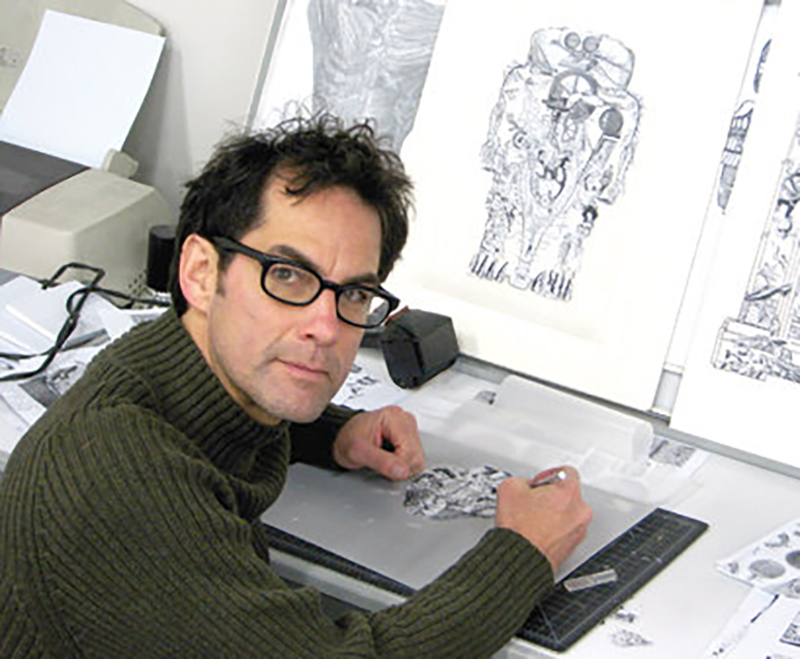 Perry Vásquez was born in Los Angeles and grew up in High Point, North Carolina. Vásquez graduated with a BA in Political Science and Studio Art from Stanford University and a MFA in Visual Art from University of California, San Diego.

He has operated in the San Diego/Tijuana border region since 1987. After completing his graduate studies in early 1990, Vásquez began making excursions across the border to investigate the cultural milieu of Tijuana. He was drawn to it’s bookstores, cinemas, souvenir shops, music clubs and public spaces. The result of his experiences was Keep On Crossin’, a multi-disciplinary project that humorously combines the guilty pleasures of tourist art with a pro-immigrant point of view.

In the 2000s, he began to cultivate his interest in oil painting with a series of prints and canvases that weave together diverse mythologies emblematic of the border region. In 2020, as a part of his ongoing Gates of Heck project, Vásquez published The Beatrice Suite (under the pseudonym Coconut Dalí), a musical composition based on the text of Dante’s Divine Comedy. Perry was recently selected to create a series of murals for the new San Diego County Probation Building. He is also a winner of the 2021 San Diego Art Prize.

Vásquez served as a curator at the Centro Cultural de la Raza from 1993-1997 and operated Ice Gallery in San Diego from 2001-2004. Vasquez worked as a graphics specialist at the Interactive Cognition Lab at UC San Diego under Dr. David Kirsh, to develop a website devoted to multimedia learning and the research and development of artistic ideas. Vásquez has developed an array of printmaking practices such as “motography”, which uses recycled motor oil for fine art printmaking.

Vásquez has exhibited his artwork in group and solo exhibitions locally and internationally and is in the permanent collections of the Museum of Contemporary Art San Diego and Laguna Beach Art Museum. The City of San Diego and the County of San Diego. Vásquez is currently a Professor of Art at Southwestern College, CA.