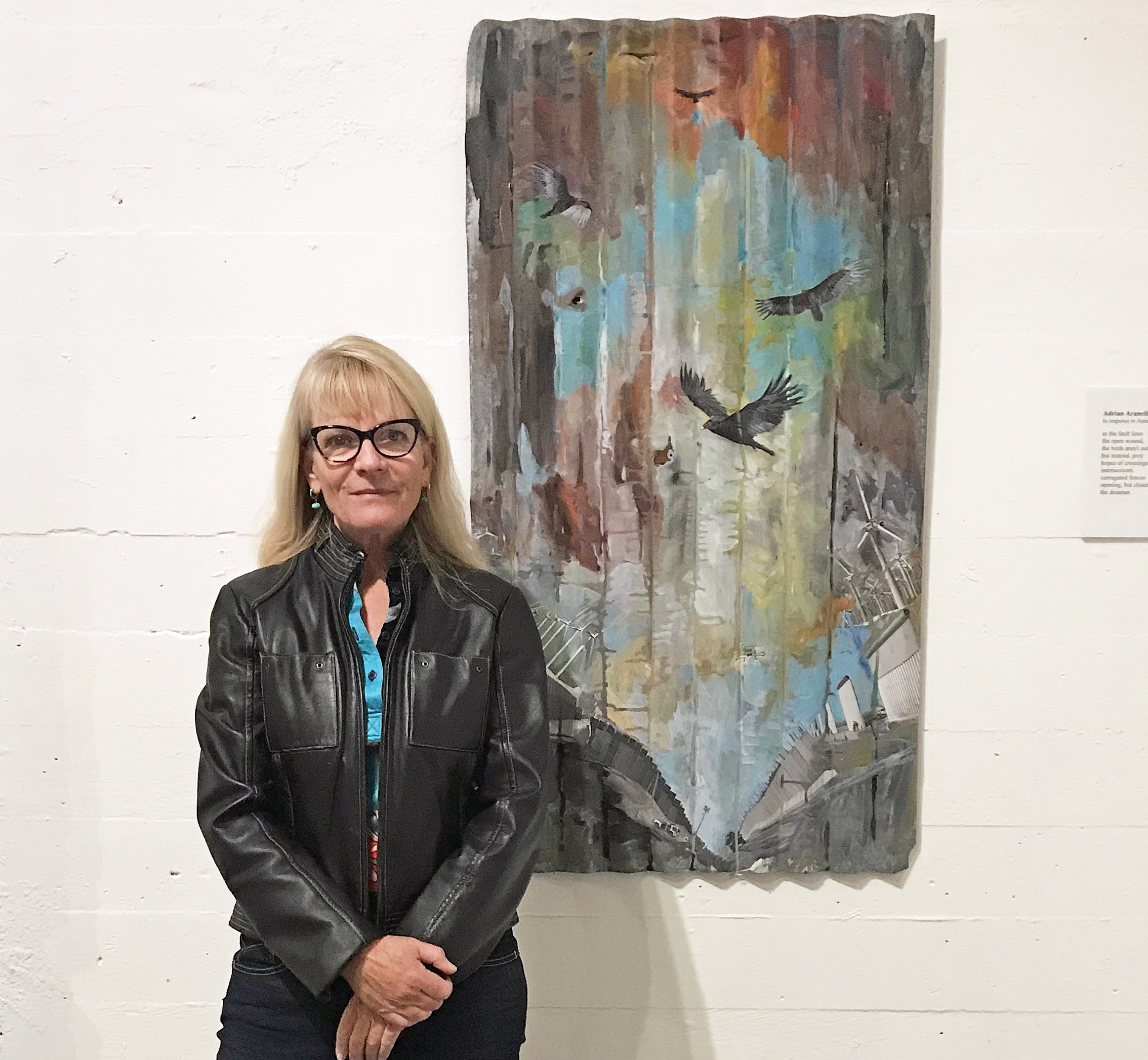 San Diego artist and art educator Anna Stump shares with us the inspiration behind her recent series “Terrariums”; this series chronicles endangered and extinct animals of the world, a multipart art project based on the environmental regions she has worked in over the years. We also probe into her experiences as a teacher, discussing her personal philosophy on art and its potential for empowerment and advocacy.

Sparks: Can you explain the concept behind your recent series of paintings of endangered and extinct animals? We have two of them at the gallery: the Passenger Pigeon and Great Auk. What about these two bird species caught your attention? What about the other animals in your series?

Stump: I became fascinated with Passenger Pigeons in the centennial of their extinction in 2014.  Scientists are now working on their “de-extinction,” using DNA found in preserved specimens. I traveled to New York City and found the famous terrarium of stuffed pigeons at the American Museum of Natural History, which became the basis of my series of extinct and endangered creatures in glass containers. Besides pigeons, this series of mixed media paintings on paper now encompasses Great Auk eggs, orcas, tidelands, song birds, and jaguars.

I generally chose the animals based on where I was at the time. I worked in residencies in Ireland, France and Mexico to make some of these paintings. Now that I live in the desert, I’m concentrating on life forms there, and am planning on creating a series based on the animals of the Mojave.

Sparks: What role do the geometric shapes included in each picture of this series communicate? Are they merely compositional, or symbolic as well?

Stump: The terrarium shape serves multiple purposes. It is literally the way specimens were preserved in natural history museums. It also serves as a coffin to enshrine the animals, and a futuristic house to point the way to new beginnings in a better world.

Sparks: What are your thoughts on art as a tool for advocacy and education?

Stump: I believe the arts, both visual and performing, are one of the best ways to reach the public, especially children. A painting or a sculpture can inspire others to create their own vision for change.

Sparks: All of your artwork is incredibly colorful and vibrant. How do you decide the color palettes for your projects? Do you have a combination you revisit for certain subjects?

Stump: Thank you for noticing my color palettes. I love color and work with it very intuitively. I rarely use more than the primary colors on my palette, and I mix all the secondary and tertiary colors for my work. Nothing gives me more pleasure than surprising color combinations. I love color schemes that should not work [in theory], but do.

Sparks: In reference to being an art teacher yourself, and in particular your classes for incarcerated individuals, what do you believe about the role of art, and artmaking, as a form of healing and empowerment?

Stump: I believe that art saves lives. I’ve experienced it, both within the prison system and at all levels of education, from young children to adult learners. Art is the gateway to learning. If a person who is introduced to artmaking becomes engaged, that person will be open to other forms of learning. Creativity translates into every avenue of human endeavor. Therefore, someone who is trained in art can become anything they want to be. Art is power.

Sparks: What is your advice to those hoping to make a statement with their art on issues they care about? Is there a certain way to go about framing important issues in your artwork?

Stump: I think that using the visual arts to communicate, to tell stories, allows for multiple layers of meaning. My advice to other artists is to show many sides of an issue, to allow ambiguity. People don’t need to be hit over the head, we have enough media doing that. The visual arts can be poetic, mysterious, and infuriating–and is stronger for all these incongruities.

From Stump’s website: “Anna Stump is an artist and arts educator living in Twentynine Palms…[she] is the founder of the San Diego Feminist Image Group, and one half of the painting collaboration team Hill&Stump. She is co-owner of the Moon Huts, a photography and video studio in Los Angeles, and is currently developing the Desert Dairy Artist Residency and Mojaveland to serve artists and the public in the High Desert outside Joshua Tree National Park.”