home
News & Events
Sparks Gallery: The History Behind The Building

Sparks Gallery: The History Behind The Building 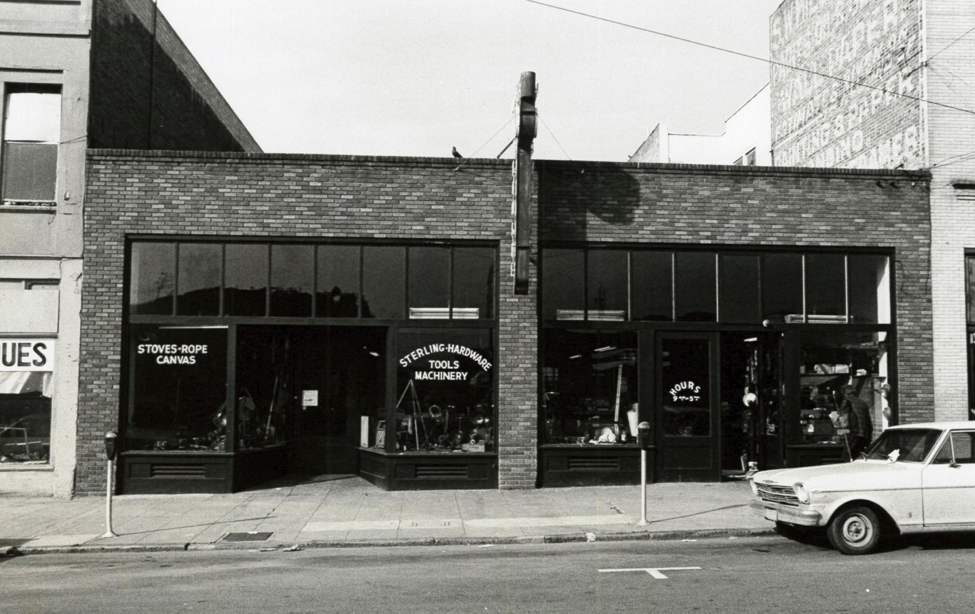 Sparks Gallery is housed within the historic Sterling Hardware building in San Diego’s vibrant Gaslamp Quarter, located between Island & Market Street on Sixth Avenue. The Building was awarded the 2015 People in Preservation Award for Adaptive Reuse by the Save Our Heritage Organization (SOHO).

Originally, the 50 x 100ft lot was leased as two separate properties. The north lot held a vaudeville theater with a stage specializing in variety shows and trapeze artists, which occupied the space from 1888-1890 under the name The Standard Theater. The south lot held a three story building with a lower level for repair and painting of carriages and upper floor rental rooms under the name Eaton Hotel.

In 1889, the north lot theater was leased to a local businesswoman, Ramona Wolf.  Her obituary in the San Diego Union stated that Ramona Wolf was half Chumash Indian and was the inspiration for Helen Hunt Jackson’s novel “Ramona,” a fictional account of the eviction of the Temecula Indians.  Later renamed the Casino Theater, it was closed by the mayor in 1895 for notorious immoral activities.  The theater appears to have gone largely unused until about 1902 when it was sold to Moritz Trepte, a German immigrant and carpenter.  His stamp is still visible on old sidewalks in San Diego.  The theater building appears to have been torn down in 1906 for construction on the adjoining lot to the north.

The south lot building was torn town around 1905 and replaced with a three story commercial building. It was mainly occupied by C. Holle Company, maker of specialized glass, from about 1911-1914. The Holle company left the building in 1914 following a fire.

Kier construction finally purchased both lots in 1924 who built the existing structure in 1924. The building facade consisted of three brick columns (one at each end and one in the center) framing two entrances made of glass and wood. The north and south sides of the building utilize the walls of existing buildings on the adjoining lots.  The rear of the building was made with hollow clay tile.  A central wood beam with wood columns running from east to west supports the roof.

The Sterling Company, sellers of second-hand goods, tools, paints and other hardware (and later Standard Hardware) utilized the building until 1980, when it was purchased by the architectural firm of Schoell and Paul.  The building was extensively renovated into office space, also adding three large roof skylights, and creating an open beam ceiling, bringing the infrastructure of the building to what we see today.

Sparks Gallery launched the space as an art gallery in 2013 and re-opened with a new design in March 2015. Architect Hanna Gabriel Wells was chosen to design the new space and Wilson Construction spearheaded the meticulous, nearly two year, restoration.

The original maple wood floor and brick walls were restored by hand creating an elegant balance between industrial and handcrafted detail. Added industrial steel columns and seismic bracing to the building expanded the capacity limit from 50 to 348 people.

The reconstruction also included the addition of an upper level mezzanine and interior structure with a catering kitchen, restrooms, office, and elevator lift to the second floor. The wood and glass portions of the façade were moved back to the exterior of the façade as in the original design and the doors and glass windows were restored to their original look. The fixtures, knobs, paint colors, chandeliers and other furnishings are all vintage 1920’s design.

The aim of the renovation is to incorporate historic San Diego with contemporary artistry. Sparks Gallery currently showcases contemporary artwork and fine jewelry from artists living in San Diego and supports the art community by encouraging the patronage of local artists.