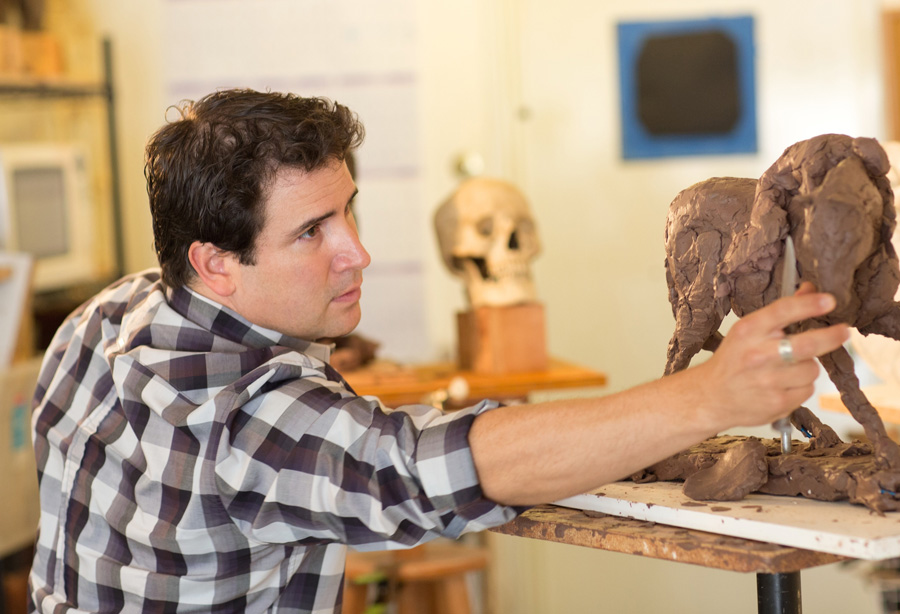 Mark Edward Adams was born in Tucson, Arizona and raised in the Phoenix area in a family of artists and musicians. Despite his initial artistic influence, Adams gravitated toward science, earning a Bachelor’s Degree in Chemistry from the University of San Diego, followed by a Master’s Degree in Science (in Chemistry) from the University of Pennsylvania. While working as a scientist, Adams discovered his passion for sculpture and began his journey into the world of art. He traveled to Italy to study classical sculpture at the Florence Academy of Art and then to Arizona to study modern sculpture at the Scottsdale Artists’ School. He continued his studies with a mentorship under the wildlife sculptor Rod Zullo who studied under the equine sculptor Floyd Dewitt. In 2013, Adams was awarded the prestigious “Beverly Hoyt Robertson Memorial Award” by the National Sculpture Society for an outstanding sculptor under the age of 40. In 2016 he then became an Elected Member of the National Sculpture Society. His work has been exhibited at the Gilcrease Museum, Tampa Museum of Art, Brookgreen Gardens, and in private collections in the United States and Europe. He has also been featured in a variety of publications including Western Art and Architecture, American Art Collector, Western Art Collector, and Fine Art Connoisseur.